LAHORE: Pakistani tech startup Car Chabi  has received USD 150,000 in seed funding from Treet Corporation, the first hardware-based Pakistani startup to get such funding, the company announced on Friday.

The fledgeling tech firm aims to revolutionise automobiles in Pakistan with a digital smartphone-based key for your car.

Car Chabi manufactures a smart device which connects to your car and gives you the ability to lock or unlock your vehicle and control it in multiple ways through a smartphone application.

The device also gives you the ability to start or stop your car, or turn its heater or AC on or off, without a physical key.

The team – led by two young entrepreneurs, CEO Muhammad Ali Rashid, COO Hammad Siddiqui – came up with the idea while working as engineering graduates in Lahore.

Car Chabi started its operations in January, 2016. Within a year, they sold 1000 units of the Car Chabi device and generated a revenue of USD 30,000, all the while acquiring customers across Pakistan.

The startup is currently being accelerated at PlanX, the country’s largest technology accelerator.

“This is the first hardware-based startup to get funding. The game has just started now. This just the beginning,” said 24-year-old Mohammad Ali Rashid, the founder and CEO of CarChabi.

“Pakistan is a very big market. You just need to believe in your ideas, and I can assure you it would be successful. It only takes time, patience, and hard work,” said the young electrical engineer and entrepreneur who graduated from FAST-NU only two years ago.

The seed funding was announced during Startup Lahore, the largest startup event in Pakistan. 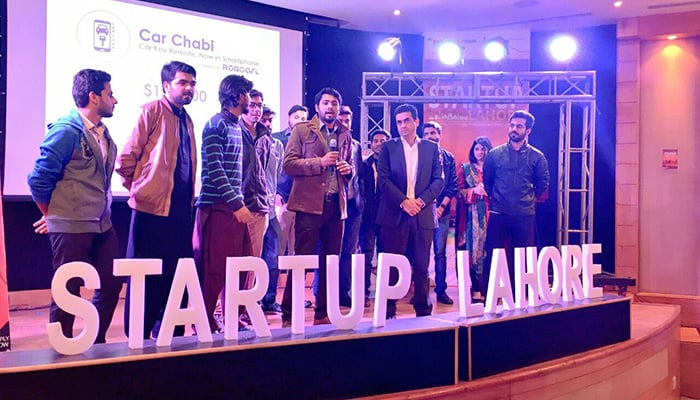 “This investment will help us expand our team and will allow us in the research and development of new products. We will also be focusing on mass production of our current product, Car Chabi and looking to expand all over Pakistan as well as the Middle East,” said Car Chabi COO Hammad Siddiqui.

“Automation is the future and Pakistan still has a long way to go. Car Chabi will get the first mover advantage. A decade or two ago what we considered a luxury (cell phones, laptops etc. have now all become a necessity). There is no doubt in my mind that automation of products will follow this trend in years to come,” Syed Shehryar Ali, Executive Director at Treet Group of Companies.

As a result of this investment, Car Chabi will now operate and be held under a parent company, named ‘RoboArt Pvt. Ltd’. Under RoboArt the team will continue to work in the field of IoT and develop a multitude of products that would cater to a larger audience in Pakistan.

“This is the first investment news of the year and one in a hardware startup. Pakistan certainly has the raw talent and now the backing of local angel investors. Pakistan has everything that Silicon Valley has and I hope that our local eco-system continues to flourish for the duration of 2017 with many more investments to follow.” Said Dr. Umar Saif, Chairman of PITB, MITEFP and Vice Chancellor of ITU.

Continue Reading
You may also like...
Related Topics:pakistan, tech