(CNN) – Malala Yousafzai has added yet another accolade to her growing list: honorary citizen of Canada.

At 19, she became the youngest person to receive that honor after Canada awarded her the title during an honorary citizenship ceremony in Ottawa on Wednesday.
“I’m humbled to accept honorary citizenship of your country,” she said during a speech to the House of Commons, where she got a standing ovation from parliamentarians.
“While I will always be a proud Pashtun and a proud citizen of Pakistan, I’m grateful to be an honorary member of your nation of heroes.”
Canadian Prime Minister Justin Trudeau handed her a certificate documenting her citizenship, along with a flag.
“Thank you, Malala, for your inspiring words. It was an honor to host you in our House — which I hope you’ll now consider your House, too,” Trudeau tweeted after the event.

The Pakistani activist became known around the world after she was shot in the head and neck by the Taliban on her way home from school five years ago.
She narrowly escaped death and, has since campaigned for the rights of girls around the world.
Days before the honorary citizenship, she was named the youngest ever UN Messenger of Peace on Monday — the highest honor bestowed by the world body.
“I stood here on this stage almost three and a half years ago … and I told the world that education is the basic human right of every girl,” she said in her acceptance speech for the UN accolade. “And I stand here again today and say the same thing.
“Once you educate girls, you change the whole community, you change the whole society.”
She also called on other girls from her home country to make their voices heard.
“You need to stand up … you need to believe in yourselves,” she told them. “You are the real change-makers. If you do not stand up, change will not come … It starts with us and it should start now.” 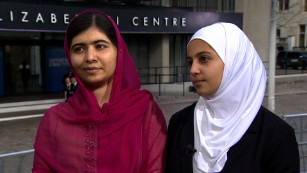 Malala: Inspiring girls globally, while an everyday girl at heart
UN chief Antonio Guterres described Yousafzai as a hero.
“It is an enormous pleasure to have you as our Messenger of Peace,” he said, praising her fight for the rights of all people, including women and girls, and their education and equality.
UN Messengers of Peace are chosen from the fields of literature, art, science, entertainment, sports and other areas of public life. Their role is to help put global attention on the work and ideals of the United Nations.
Other Messengers of Peace include Leonardo DiCaprio, chosen for his work on climate change and other environmental issues, and Stevie Wonder, a committed campaigner for the rights of people with disabilities.
Continue Reading
You may also like...
Related Topics:canada, pakistan, politics