Usman Institute of Technology’s DICE Student Chapter organized its annual Virtual Innovation Competition (VIC) this week. After an extensive procedure of screening and intense pitches, eAnalytic came out on top to bag the winning spot and got themselves entitled to a cash prize of Rs. 40,000. think of innovative solutions to common problems. The Competition provides a platform for the participants to pitch their ideas in front of a panel of industry experts and existing entrepreneurs for further assessments of their ideas.

This year, the judging panel consisted of: 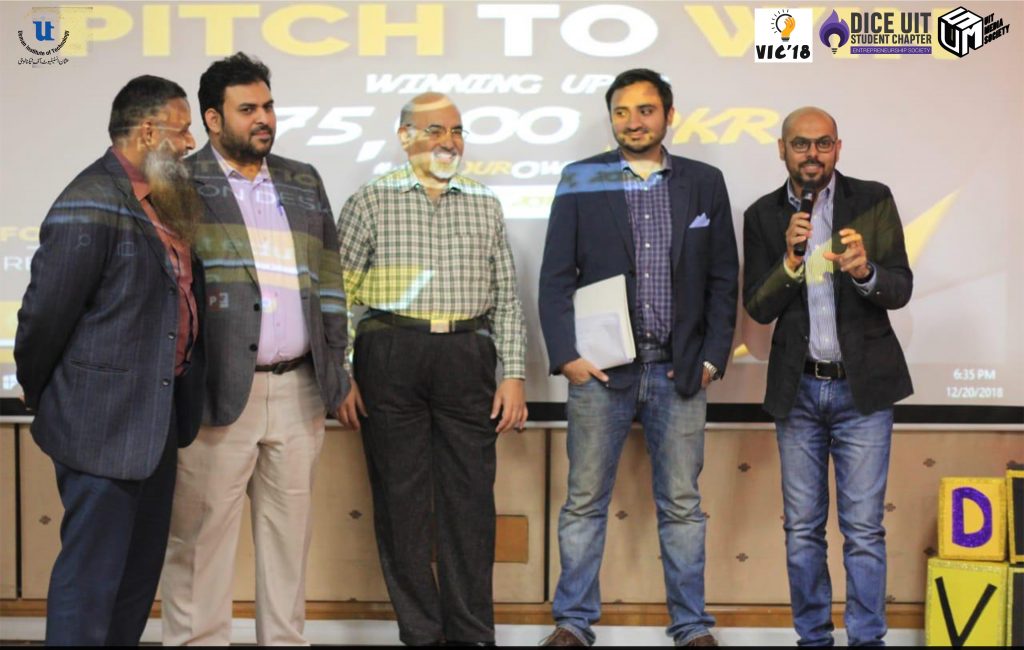 The judges had to hear and evaluate pitches from 40 teams. The judges evaluated the ideas based on the idea itself, the strategical planning and the sustainability of the idea. The competition was based on 2 rounds:

The first round consisted of 2-minute elevator pitches. A total of 2 minutes was given to each team to present their idea in front of the panel of judges verbally. After an extensive period, the judges screened out 35 teams, leaving out only 5, which then proceeded to the next stage.

The second round allowed the teams to visually represent their ideas, i.e. through presentations. A time allowance of 5 minutes was granted to the teams, which is considered more than enough in normal idea-pitching standards. The presentations consisted of complete business models of the ideas, i.e. covering each and every aspect of the business and its feasibility.

After the second round ended, the panel of judges sat together to decide which of the idea deserved to win. Discussions took place for a long time, after which the panel came to a unanimous conclusion and chose eAnalytics as the winner while Safe Journey and Anatomy 3D were chosen as the runner-ups.

eAnalytics bagged the winning spot. The idea revolved around the reduction in cost of electricity for regular, household consumers. The idea was presented by Mr. Ahmed Abdullah, Mr. Syed Ali Hamza and Mr. Osama Asif. The team was awarded Rs. 40,000 as a token of recognition.

Safe Journey came in to bag the first runner-up spot. The idea was based on the concept of making your journey safe by raising alarms when the Artificial Intelligence system detects drowsiness. The team consisted of Mr. Hammad Fatmi, Mr. Arsalan Nasir, Mr. Osama Mehmood and Mr. Salman Khalid. They were awarded a cash prize of Rs. 25,000.

Anatomy 3D came in the second runner-up spot. Anatomy 3D provided a 3D animation platform for medical students which could help the students in better understanding the human body. The team consisted of Mr. Shaiq Ul Hassan and Mr. Muhammad Hassan. They received a cash prize of Rs. 10,000.

We would like to congratulate all the winners and extend a token of appreciation and recognition to the rest of the teams as well. With this, TechJuice signs off as the Official Media Partner of VIC ’18.

Continue Reading
You may also like...
Related Topics:Business, pakistan